Top
References - ASYYL4
Atomic diffusion in the atmosphere of Feige 86 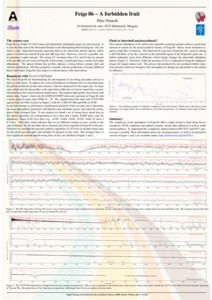 The poster presented at sdOB8.
The science case
Feige 86 is a bright (V=10.02 mag) and infamously challenging target for spectroscopy. It is near the blue end of the Horizontal Branch in the Hertzsprung-Russell Diagram. The star shows a rich, sharp-lined peculiar spectrum both in the ultraviolet and the optical, which places it in between normal B type and sdB type stars. However, even for a peculiar star, its spectrum is quite unusual. The strong UV resonance lines of C and Si that are present in B and sdB stars are weak in Feige 86, while metals, in particular heavy metals show high abundances. The optical helium line profiles indicate a strong helium isotopic shift and vertical stratification (Hartoog, 1979; Cowley et al., 2009). All these properties coincide with the predictions of atomic diffusion theory and makes Feige 86 a key target to confront theory with observations (Michaud et al., 2011).
Reanalysis with TLUSTY/XTGRID

We chose Feige 86 for benchmarking the development of our fitting procedure and use it here as a tech-demo. To address the vertical distribution of elements first we must determine the global metallicity profile and construct a line list optimized for the target type. In many cases either only the line profiles or the equivalent width ratios of narrow metal lines can give information on the vertical element stratification. This requires high quality observations and atomic data. Our XTgrid fit [best on wide screen] shows the R=10 000 IUE/SWP ultraviolet spectrum of Feige 86 with a mean signal-to-noise ratio (SNR) of ∼25. We complemented this data with VLT/UVES spectra from the ESO Archive with R=71000-107000 and SNR of 30-80. In our first attempt we performed a simultaneous global fit of the two data sets to determine the mean atmospheric parameters and find the most abundant species and refine the atomic data of their strongest lines. To our surprise we found a set of strong heavy metal lines in the optical spectrum, all corresponding to Xe II lines and a nearly 20000 times solar Xe abundance. Some of the Xe II lines (e.g. λ4180, λ4208, λ4245, λ4330, λ4462 Å) show a 6.7 km/s blue shift, which indicates that we see different isotopes at once, similar to the case of helium. Xe, Bi and other heavy elements have been reported in Feige 86 in the past (Bonifacio et al., 1995; Castelli et al., 1997). Therefore we extended the spectral synthesis capabilities of XTgrid to include atomic data for the whole periodic table and included 78 elements in this work. The strongest lines of each significant element and all strong lines of Xe II are labelled in our XTgrid fit [best on wide screen].

Figure 1: The abundance pattern of Feige 86, compared to the solar mixture. While most of the heavy metal abundances are upper limits, the overabundance of Xe hints the presence of a hitherto unseen peak of heavy elements.

The extreme abundance of Xe and its nine naturally occurring isotopes make it a good trace element to search for the nucleosynthesis history of Feige 86. Heavy metal formation requires a high flux of neutrons. The observed Xe may have formed by the r-process during a shell He-flash, or by the s-process in the intershell region of the progenitor giant star. A further ambiguity arises from diffusion, which largely changes the observable abundance pattern (Figure 1). Therefore, while the presence of Xe is confirmed in Feige 86, finding its origin will require future work. The process that produced Xe also produced further trans-iron elements which are brought to the atmosphere by dredge-up and pushed to the surface by diffusion.

The complexity of the atmosphere of Feige 86 offers a high reward to learn about hot atmospheres, NLTE conditions and radiative transfer, atomic data, diffusion as well as stellar nucleosynthesis. To understand this complexity, high-resolution HST FUV and NUV spectroscopy is needed.