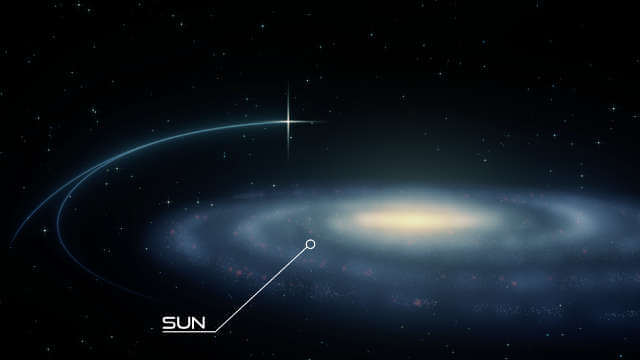 PB 3877 is a hypervelocity wide binary star zooming through the outskirts of the Milky Way galaxy. This image shows its current location. (Copyright and image credit: Thorsten Brand)
A team of astronomers at the Friedrich Alexander University, Erlangen-Nürnberg (FAU, Germany), lead by Péter Németh, in collaboration with researchers from the California Institute of Technology (Caltech, USA), has discovered a binary star (PB 3877) that is moving nearly at the escape velocity of our Galaxy. About two dozen stars escaping from the Galaxy, termed hypervelocity stars, are known today. While all of them are single stars, PB 3877 is the first binary star found to travel at such a high speed. It is widely accepted that hypervelocity stars are accelerated by the supermassive black hole in the center of our Galaxy. The results of the new study challenge not only this scenario, but pose further questions. The team showed that the star cannot originate from the Galactic Center, and no other mechanism is known that is able to accelerate a wide binary to such a high velocity without disrupting it. Whether the star is bound to the Galaxy or not depends on the amount of dark matter in the Galaxy. The team found that there must be a lot of dark matter to keep the star bound. Otherwise PB 3877 could be an intruder that has been born in another galaxy and may or may not leave the Milky Way again.

The new results on PB 3877 have appeared in the April 10th (2016) volume of The Astrophysical Journal Letters.

PB 3877 was first reported to be a hypervelocity hot compact star, when it was discovered form the Sloan Digital Sky-Survey (SDSS) data in 2011 by the FAU team of Prof. Ulrich Heber. New spectroscopic observations were done with the 10.2m Keck-II telescope at the W.M. Keck Observatory on Hawaii and with the 8.2m Very Large Telescope (VLT) of the European Southern Observatory (ESO) in Chile. Caltech astronomers Thomas Kupfer and Felix Fürst observed PB 3877 at the Keck Observatory and remembered: “When we looked at the new data, much to our surprise, we found weak absorption lines that could not come from the hot star.” The cool companion, just like the hot primary, shows a high radial velocity. Hence, the stars form a binary system, which is the first hypervelocity wide binary candidate.

The track of PB 3877 across the Milky Way galaxy. The animation shows both the bound and the unbound scenarios. (Copyright and animation credit: Thorsten Brand)

The atmospheric parameters of the members and their spectral types have been established. The surface of the hot compact star is more than five times hotter than the Sun, while the companion is a thousand degrees cooler than our Sun. A distance of 18,000 light-years was found to PB 3877. The mass of the hot compact star is only half of the mass of our Sun, and the companion is 0.7 times the mass of the Sun.

“No significant radial velocity changes were found on a time-base of nine years, indicating that either the orbital period of the binary is very long, or we look at the system at an unfavorable angle. The long-period binary scenario is more likely as dozens of analogous long-period binaries are known in the galactic disk.” said Stephan Geier.

“The puzzle is not the high velocity, because other hypervelocity stars are known that travel twice as fast, instead, it is the binary nature of the star. We cannot image a mechanism that is able to eject a wide binary at such a high speed without disrupting it at the same time.” Németh explained. Heber added: “We studied hypervelocity stars since 2005, the year of discovery of the first three. In the meantime about two dozen have been found, but none has a companion directly visible in its spectrum.”

The center of our Galaxy hosts a supermassive black hole, which is capable to accelerate and eject stars from the Galaxy, by disrupting an original binary star. Hence, most hypervelocity stars are believed to originate from the Galactic Center. Team member Eva Ziegerer, specialist in stellar kinematics, collected astrometric data and reconstructed the orbit of the binary: “From our calculations we can exclude the Galactic Center as the place of origin, because its trajectory never came close to it.” Other ejection mechanisms, such as stellar collisions and a supernova explosion have been proposed, but all of them would lead to the disruption of a wide binary.

Németh suggested: “PB 3877 may be an intruder from another galaxy. In that case its prolonged gradual acceleration would not harm its integrity. The outskirts of our Galaxy contain various stellar streams that are believed to be the remnants of dwarf galaxies that were torn to shreds by the strong tidal force of the Milky Way.” Unfortunately, the available data do not allow to make a connection to any of the known streams. Therefore, the origin of the binary remains unclear and so is its future. Whether or not the system remains bound to the Galaxy depends on the amount of dark matter in the Galaxy. Therefore, the mere existence of this binary puts pressure on our models and on our current understanding of dark matter in the Milky Way.

Scenic view of the W.M. Keck Observatory. (Copyright and image credit: Andrew Richard Hara)
“We used different mass models to calculate the probability that the star will actually remain bound to the Galaxy. Only for the most massive Galaxy model this is the case. This makes PB 3877 an excellent target to probe dark matter halo models.” Andreas Irrgang explained. With the new measurements that are being collected by the European Space Agency's Gaia (Global Astrometric Interferometer for Astrophysics) satellite the kinematic properties of PB 3877 can be determined with a higher precision.

The research continues with high-resolution spectroscopy to confirm the orbital properties of PB 3877 and with a photometric follow-up to search for variability. “By finding further stars or binaries on similar orbits would indicate an external origin. Therefore, our quest for similar strangers will continue.” said Németh.