LP 40-365: An unusual white dwarf star may be a surviving remnant of a subluminous Type Ia supernova 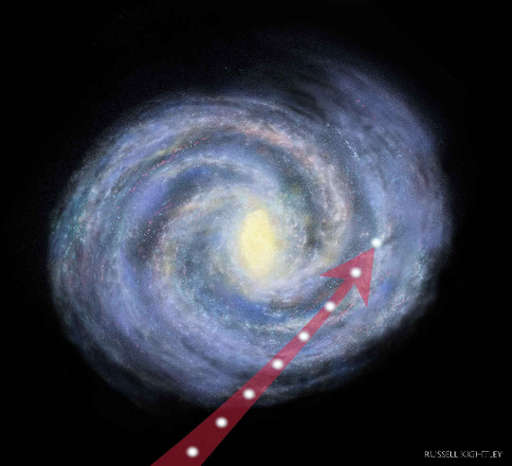 
These findings are presented in the August 18th (2017) issue of Science, published by the American Association for the Advancement of Science (AAAS).

The class of supernovae known as Type Ia are the brightest explosions in the Universe and are fundamental to measure its huge dimension. The recent discovery of dark energy rests almost entirely on our current understanding of these powerful explosions.

The animation shows how the story of LP 40-365 developed over the past 30-50 million years, condensed in half a minute: The white dwarf accretes material from a close companion until it exceeds its mass limit and explodes as a supernova. The imperfect explosion shoots out a shrapnel of unburnt core material towards the Milky Way galaxy. Finally, the shrapnel is observed as a fast moving, very low mass, peculiar white dwarf zooming past the solar neighborhood. The closest approach to the Sun was about 500,000 years ago at a distance of merely 300 parsecs.
(Copyright and animation credit: Sardi Pax, https://www.youtube.com/c/SardiPax, Used with permission.)

To understand the nature of these explosions cosmologists adhere to a behaviorist approach concentrating mainly on environmental factors and the nature of the galaxies hosting these events. Following that approach it is possible to calibrate the true luminosity of these supernovae and use them as standard candle lights to measure distances. But then we know nothing of the explosions themselves. Stellar astrophysicists follow a constructivist approach and build models aimed at a deeper understanding of the engine powering these explosions. 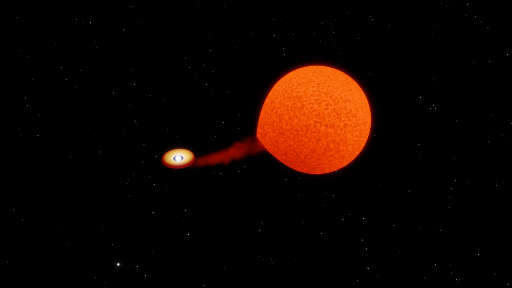 The white dwarf progenitor in the initial close binary system accreted mass until reached the condition for a supernova explosion.
(Copyright and image credit: Sardi Pax, https://www.youtube.com/c/SardiPax, Used with permission.)
Physical models suggest that the engine at the heart of a Type Ia supernova is the deep gravitational well of a compact star known as a white dwarf buried over time with matter dumped by a very close companion star. This continuous feeding compresses the white dwarf to such a high density and temperature that the whole white dwarf is engulfed in a thermonuclear explosion.

"Such a cataclysmic binary star has never been caught feeding and getting ready for the explosion," commented Stephane Vennes, leading author of the Science article. "All we ever witness is the aftermath of the explosion, that is the bright flash in the distant Universe that even outshines the galaxy hosting that event. But now, with the discovery of a surviving remnant of the white dwarf itself, we have direct clues to the nature of the most important actor involved in these events.

"For a remnant to survive, it is necessary to invoke a special class of uncommon supernovae that do not completely destroy the white dwarf at the heart of the explosion. The new class of models developed in recent years by multiple teams is able under narrow circumstances to leave a partially burnt bound remnant that is instantly ejected at an exceedingly high velocity. This is the model favored by the research team. "Indeed, the white dwarf LP 40-365 is escaping the Milky Way", commented Lilia Ferrario from the Australian National University.

The large apparent movement of LP 40-365 is easy to spot by eye over the 40 years baseline between the DSS1 and DSS2 surveys. While the other stars move very little, LP 40-365 will be off the image in 1500 years.
(Image source: ESO Online DSS; astroserver.org)
The two-year long study involved multiple observations with telescopes located in Arizona, the Canary Islands, and Hawaii. The new star was first identified with the Mayall four-meter telescope at Kitt Peak National Observatory in Arizona.

"We selected this object for observation with the spectrograph at the four-meter telescope because of its large apparent motion across the celestial sphere. Thousands of objects like this one are known, but the sky was partly cloudy on that night and we had to go for the brightest star available which turned out to be LP 40-365," said team member Adela Kawka, underpinning the importance of serendipity in astronomy.

A final, crowning data set was obtained with the help of team member V. Khalack at the Université de Moncton using the CFHT/GRACES spectrograph fed by an optical fiber hooked to its neighbor, the eight-meter Gemini-North telescope located on Mauna Kea. The data were analyzed with state-of-the-art computer codes. The analysis proved the compact nature of the star and its exotic chemical composition.

"The extreme peculiarity of the atmosphere required a lengthy and complex model atmosphere analysis which crunched several weeks of computing time. But the results proved very exciting. Such a peculiar atmosphere devoid of hydrogen and helium is rare indeed", commented team member Peter Nemeth. 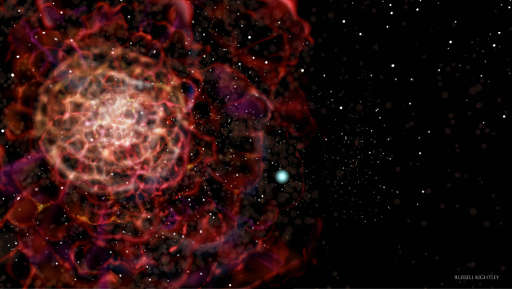 The white dwarf shrapnel leaves the site of the supernova explosion and moves towards the Milky Way galaxy.
(Copyright and image credit: Russell Kightley, www.scientific.pictures, Used with permission.)
Supernova models and simulations did entertain the possibility of observing surviving stellar remnants in the aftermath of a supernova explosion. The unique object LP 40-365 is the first observational evidence for surviving bound remnants of failed supernovae and therefore it is an invaluable object to improve our understanding of these cosmological standard candle lights.

From the ANU press release: Scientists from The Australian National University (ANU) and overseas have helped to solve the mystery of what causes exploding stars, which are used to measure the accelerating expansion of the Universe. The international study has found that a small star hurtling through our Galaxy is highly likely to be a piece of shrapnel from a huge explosion that happened millions of years ago.